In a tiny historical corner of County Kildare a rare little gem called Highfield has evolved.  Kildare is a county that increasingly is producing some fabulous golf courses.  The world and its mother it seems, knows all about the K Club at Straffan where the Palmer Course played host to the 2006 Ryder Cup and the beautiful is Carton House near Maynooth which has played host to the Irish Open.  Highfield is not a course that will ever play host to a championship, but for all that, it captures the heart and soul of what Irish golf is all about.  It’s the story of a long time farming family, the Duggans, who when the head of the family died suddenly in 1989 realised that their future security lay away from farming. So the decision was made to turn the farm that had served family for over 250 years into a golf course.

In their case there was to be no big name professional golfer brought in to design the course.  Alan Duggan one of the three brothers in a family of six, who had trained as a green keeper at the National Botanic Gardens in Dublin and who then spent two years as the course Superintendent at the Nurenmore Hotel & County Club in Co. Monaghan, designed the layout.

The aroma in the unique clubhouse at Highfield Golf & Country Club, near Carbury in unquestionably that of a turf fire.  On any day that has the merest hint of cold air, a turf fire is to be found burning in the Conker Bar of the Canadian Log Clubhouse amidst the aroma of ‘Granny’s Scones’ & Irish homemade jam.

This land that now houses a Canadian Clubhouse and similarly styled Log Holiday retreats and a golf course- where believe it or not, the first tee-box is actually located on the top of the clubhouse- is steeped in history.  Fortifications and castles have stood in this area since pagan times and the castle in the hinterland were frequently plundered and destroyed.  One such Castle – Carrick- just a mile away from Highfield was the scene of  a noted massacre in 1305 when Jordan Comin and Sir Pierce Mac Feorais invited Murtagh O’Connor, King of Offaly, and his brother Calvagh along with 29 of their companions, to a  feast on Trinity Sunday at Carrick Castle.  After the feast O’Connor and his men were massacred and their heads sold at a price to their enemies.

Happily today the welcome to Co.Kildare is a good deal more hospitable.  Phil Duggan is the matriarch of the family.  When her husband Denis died in 1989. she wholeheartedly endorsed the decision to gradually move away from farming to golf.  The family’s lifeblood had always been farming but golf had also been a part of their lives.  Indeed, the Duggan Cup, an inter-club competition for senior golfers is a very popular tournament played annually in Leinster and was conceived by Denis before his untimely death.

The farm that passed on to his family has undergone a complete transformation. ‘ We worked it out that if we sold off all the stock we could clear our debts. Farming was getting much tougher and back then we golfed for  a hobby and farmed for a living.  Now it’s the other way around’ claims Alan Duggan.   The Course too has matured significantly since it first opened in 1991.  In fact, the original layout was worked out simply by evaluating where best to position the greens.  ‘Our family has been farming this land for over 250 years, so we knew where the best places were.  We found 35 possible sites for greens, and then worked backwards around the natural habitat in designing the golf holes’ explains Alan – also a single handicap golfer. 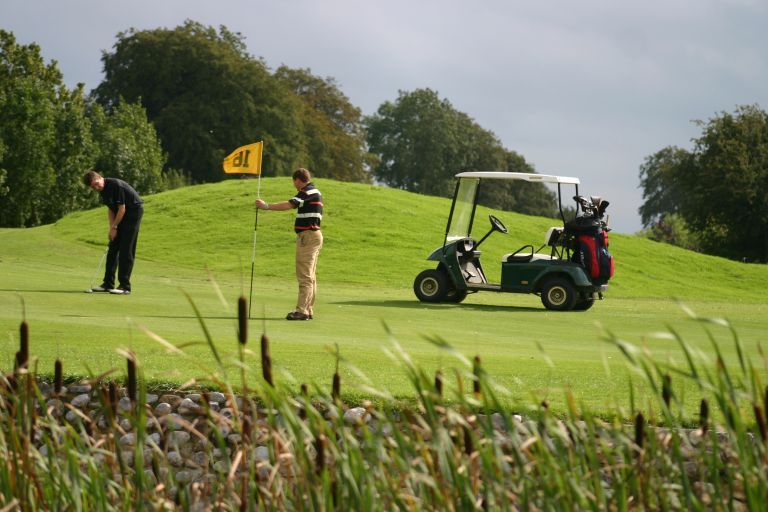 These days the course bears no resemblance to its early days but retains all the character and the ever-present family touch.  The ubiquitous Alan is the Manager but he might also greet you as you arrive in the Clubhouse, then you could meet him working out on the course and then be seen pulling you a creamy pint in the bar when you return.  It is very much a unique family enterprise.  His mother, Phil, younger brother, Denis Jr are all involved as is Alan’s wife Avril, who handles the Marketing and is also the interior designer of the spectacular 4* Holiday Lodges.

The Clubhouse is indeed an unusual structure, the only one of its kind in Ireland. Some 800 Canadian cedars were used in its construction. ‘It’s a dying art, it’s all handcrafted’ says Alan.  ‘The clubhouse was built in Canada, then dis-assembled and brought over to Ireland where the Canadian workmen reassembled the structure on site’.  Forever conscious of the environment, the Duggans planted over 30,000 new trees around the course to offset using the Canadian timber. ‘ Does the ozone layer know if the trees are in Canada or Ireland’ he asks with a laugh.

Indeed environmentalists praise Highfield as a ‘fine example of the sensitive integration of a  leisure facility with the environment’.  Careful grassland management has led to the creation of greens with minimal use of chemicals.  Unused areas will away from play have been left uncultivated.  There is a network of wildlife corridors that incorporates watercourse banks, hedgerows and mature trees.

Extract from ‘Ireland of the Welcomes’ a Failte Ireland publication

We are located only 30 minutes from the suburbs of West Dublin and 11 miles from Enfield and the N4.